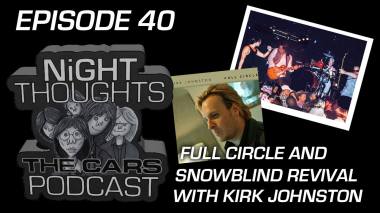 The week’s podcast gets an extra shot of rock and roll with our very special guest, Mr. Kirk Johnston! Kirk has long been known in the Fanorama as a highly talented vocalist and bass player. He is beloved for his album, Full Circle, featuring beautiful versions of some of Benjamin Orr’s best known songs. He further won the hearts of fans with his generous work for the Pancreatic Cancer Foundation in Benjamin’s name.

In this episode, Dave and Donna explore Kirk’s musical background, when he got hooked on The Cars, and how Benjamin Orr shaped and influenced the course of Kirk’s musical career. Kirk gives Ben all the credit for stretching the boundaries of Kirk’s talent, from pushing him to be a better bassist to teaching him to sing, to being the compass guiding Kirk toward a radical change in his sound.

From there they dive into the making of the Full Circle EP and its progressive expansion, covering aspects like:

With Kirk currently remastering and re-releasing music from his career with the hard-rocking Texas band Snowblind Revival, Dave and Donna walk him through the rollercoaster of the group’s heyday and what led to bringing the music back in 2018.

Featuring the late Dennis Clevenger on vocals, drummer Wes Korner,  bassist Nathan de los Santos, and Kirk on lead guitar, the four friends went from high school jam sessions to playing gigs all across the United States. After being on the verge of a record deal that was never realized, the band imploded and relationships fell apart. Kirk shares how amends were made, the tragedy of Dennis’s early death, and some of the parallels between Dennis’s story and Benjamin Orr.

Never one to do a project without a heartfelt purpose, Kirk explains his motivation for releasing this music now: to offer help and healing to those struggling with thoughts of hopelessness, and to solidify a creative and financial legacy for Dennis’s young son.

We highly encourage you to check out Snowblind Revival’s incredible music, watch videos of their performance, and support Kirk’s vision by visiting www.snowblindrevival.com. And be sure to follow Kirk and the Snowblind Revival project on Twitter, too!

The episode closes out with Kirk’s amazing version of Benjamin’s hit, “Stay the Night,” showcasing a swaying tropical sound and a little Texas flair.

Don’t wait another minute to get to know Kirk. Click below and enjoy!