Once upon a time, in the peaceful hamlet of Allston, Massachusetts, a diabolical plot was carried out: the murder of Michael Mackin! But who could be so evil? So cunning? And so sure that he… or she… could escape detection?

Okay, that’s not exactly what happened… er, at least not for real.

On August 8, 1987, Boston’s public access television station, WGBH, hosted a benefit as part of their annual fundraising events. The theme was “Murder at MYSTERY! Mansion” and those in attendance were charged with the task of solving a faux crime, specifically, figuring out who murdered Channel 7 reporter Michael Mackin. Other local celebrities and notable personalities were there, too, and, as witnesses to the ‘death’, were considered suspects.

One gentleman at the charity event was Massachusetts State Police (MSP) Corporal Bob McKeon. Bob was recruited as a volunteer by Carole Nash, owner of the Nash Modeling Agency in Boston, to play the part of the arresting officer at the end of the evening.

As best as Bob can recall from this night over thirty years ago, the excitement got underway while the volunteer actors were gathered on a stage and the guests were mingling nearby. The lights suddenly went out, and when they came up again, Mike Mackin was dead on the floor — the game was afoot! After his body was removed, guests had to interact with the suspects to try to determine who was responsible for the terrible tragedy.

Bob himself was downstairs in a private room, waiting for his cue for the grand finale. He wasn’t privy to all that was happening above so he isn’t sure how Vincent Price fit in, or if a dinner was served, or in what ways the guests obtained clues to solve the mystery. But he was far from bored: Mike Mackin was brought into the room from the stage, and the two had fun shooting the breeze while the event continued upstairs. A little later, Bob had the pleasure of chatting with Benjamin Orr and Diane Page for a bit when they stepped away from the action of the stage.

While Ben and Diane stayed close together most of the evening, Ben made his way down to the room for a short break. He and Bob conversed easily as they found they had obvious common interests. “Ben was a supporter of the MSP. He asked me about my career. Apparently he was friendly with some of the Troopers on the Mass Pike [located in Weston] and mentioned going to the shooting range with a couple of them. He spoke well of the Massachusetts State Police.”

Diane joined them shortly afterwards. Bob found Diane and Ben to be refreshingly genuine and open, and he enjoyed their quiet chat very much.

Eventually it was Bob’s turn to make his appearance in the drama. He headed back upstairs and prepared for his signal calling him to emerge through the curtain.

“When it came time to see who was responsible for Mackin’s murder, I walked onto the stage. I stood out like a sore thumb being dressed in two-tone blue and not black and white like everyone else,” Bob recalled. He played his part perfectly. “I slowly walked past all the alleged suspects and returned to Diane and arrested her for the murder. Then I surprised the crowd by arresting Ben as a co-conspirator before and after the fact.”

The evening was a success, and remains a wonderful memory for Bob.

“It was all in good fun and they raised a sizable sum of money during the event. I was happy they took a photo of myself with Carole, Diane, and Ben. It is a great memory of a fun event. I found Diane and Ben to just be normal folks when I was one-on-one with them. Ben was really nice and I felt sad when he passed.”

Of course, the ‘charges’ were dropped and no one’s permanent record was affected, though Ben did leave a favorable lasting impression on Bob McKeon.

Thank you so much for sharing your little bit of Ben history with us, Bob!  ❤

“Was this for real? Here was this incredible man I loved saying the most romantic words. He bent down on one knee and pulled out a stunning diamond ring. He brought me to Weston to propose on my birthday… Who could say no to that?

“We were only engaged for a month and we had the most spectacular tropical island wedding in the Fern Grotto in Kauai, Hawaii. Ben planned it all himself while I was working. It couldn’t have been more perfect.” — Judith Orr, excerpt from Let’s Go! Benjamin Orr and The Cars by Joe Milliken

Back in February I was poking around on Facebook and I stumbled across this hidden gem that Boston musician (and Associate Professor at Berklee College of Music) Lisa Guyer posted back in 2014:

What the heck? Here was an event Ben was involved in that I had never heard of before, and with another of my favorite Boston rockers, Charlie Farren! Lisa’s post gave me some obvious clues to the story behind the photo and I was eager to start digging.

Initially, there wasn’t much to find. At the end of the day my little file consisted of the Facebook screen shot above, one newspaper clipping, and a newfound familiarity with the Hatch Memorial Shell and the song “Dirty Water” by The Standells.

Though I couldn’t find an exact listing for it on the Guinness Book of World Records website, apparently there is a category for most guitarists (or musicians?) playing one song for the longest period of time. In 1994, 1,322 guitarists jammed with Randy Bachman to “Taking Care of Business” for 68 minutes and 40 seconds, and I think that was the record… But then it gets kind of confusing, because there seems to be some crossover between setting a record for the largest guitar ensemble playing one song, and the largest guitar ensemble playing one song for the longest time, and I just can’t figure it all out right now so… let’s just settle on knowing that in 1997, hundreds of guitar players and musicians in Boston gathered in attempt to break a Guinness world record by playing “Dirty Water” by The Standells for a really long time.

That song, by the way, is a beloved Boston anthem. The tune has been cranked for cheering crowds after home victories by the Bruins and the Red Sox since about 1995. Written by Standells producer Ed Cobb and released in 1965, the lyrics draw attention to some of the less savory elements of Boston history and what used to be the disgustingly polluted Charles River, and yet the singer declares, “I love that dirty water. Boston, you’re my home!” The simplicity of its garage rock beat and catchy riff seal the deal as a natural song choice for tackling this world record (whatever exactly it may be).

And the venue… Officially titled the Edward A. Hatch Memorial Shell, Bostontonians have been enjoying a variety of free outdoor concerts, movies, and public events at the Hatch Shell for over 90 years. Its unique structure is located on the Charles River Esplanade and is surrounded by a large and inviting lawn. The Shell’s spacious wooden interior, which is famous for regularly accommodating the Boston Pops Orchestra, provides plenty of room for multiple guitarists, drummers, and keyboard players to spread out. Isn’t it gorgeous? 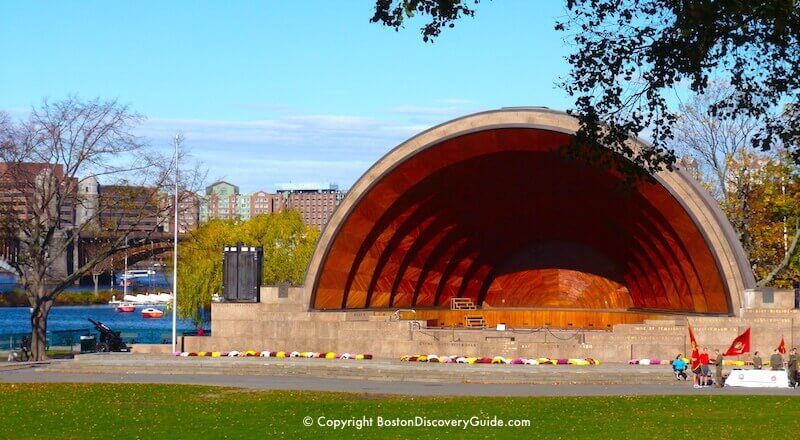 After gleaning these tidbits, I had to table the topic. But a most happy circumstance has brought it back to the forefront! Jonathan R. discovered and generously shared a very recent YouTube upload of some live footage from this event ~ including Benjamin!

There are actually five video clips all together. I’ve created a playlist of the segments in chronological order.

The video clips armed me with new keywords to search and angles to pursue, and I was able to find a couple more articles from The Boston Globe. Here are some additional factoids I picked up:

You know, there were at least a half a dozen photographers crawling on and around that stage. What a treasure it would be if they would dig out their booty and share photos of the show with us! Pretty please?

And while we’re at it, I would love it if Candi Bettencourt would upload the entire uncut footage. Even if it’s not the best camera work, fans would rejoice in being able to experience this bit of Boston history with so many incredible musicians.

There are a couple of cool photographic dots we can connect here, by the way.

First, this is the same event our friend AJ Wachtel told us about; it was the last time he remembers getting to hang out with Ben. This photo on the right is from that day — click here to read the full article.

Also, Mazarkis S. pointed out that this event is also the likely location of another classic Ben photo. It’s kind of tricky, because Ben wore his ABATE shirt a couple of times (I’m thinking particularly of Ben with Tom Hambridge at the Snowfest in Two Rivers, Wisconsin), but based on the color of the lanyard and access pass, I believe Mazarkis is right.

That’s about all I could come up with. I’ll post the newspaper articles in an album on Facebook. I’m keeping my fingers crossed that maybe others will chime in with their memories, photos, or videos of that day. I remain optimistic that more bits o’ Benjamin history will surface; surely there is more to discover!

Whenever I am researching something specific like this, I end up going down sooooo many little rabbit holes, which is frustrating because it then takes forever for me to finish an article, but it’s also cool because I tend to discover some pretty interesting stuff. Here are a couple of the ‘bonus features’ I found when I was working on this article.

Okay, enough of that. I’ll leave you with this bit of grand delight. Enjoy!

“All Mixed Up” by The Cars

She shadows me in the mirror, she never leaves on the light

And some things that I say to her, they just don’t seem to bite

She tricks me into thinking I can’t believe my eyes

I wait for her forever but she never does arrive

Everything will be alright

If you leave it to me everything gonna be alright

Yeah, if you leave it to me

“I was presented with the idea of doing a solo album. Being the bright, intelligent person I am, I said sure. Why let a chance go by? No reason not to.” — from “Benjamin Orr: The Cars’ Mr. Casual Steps Out” by Rob Tannenbaum, Musician Magazine, March 1987

This beautiful song has been a favorite of mine for many years, but today it is reminding me of how Benjamin’s voice, music, and image have provided an escape for me during this crazy time of sheltering at home and trying to keep my loved ones safe and healthy from COVID-19. ❤

“I close my eyes then I drift away

Into the magic night, I softly say

Then I fall asleep to dream my dreams of you

In dreams I walk with you, in dreams I talk to you

In dreams you’re mine all of the time

We’re together in dreams, in dreams”